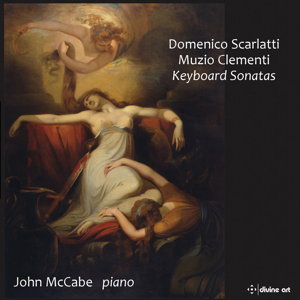 'Liverpool-born John McCabe (1939-2015) needs no special pleading. Regarded by many as one of the most important late 20th/21st century British composers, he was also a pianist of huge technical skill, profound musicianship and a sympathetic understanding of the wide range of music he performed....this music [Scarlatti] seems to be played with a studied balance between flair, rhythmic freedom and a characteristic attention to detail. [Clementi: Didone Abbandonata sonata]: I would swap much 'classical' piano music for the slow movement "andante dolente" of this sonata - and the finale takes one breath away; it is amazingly played by John McCabe'. - John France, Music-Web International

'After hearing the Clementi disc, my urge is to discuss the music itself, to explore the parallels between Clementi and his contemporaries, and to discover more of Clementi's music. There can be no greater tribute to the artistry of John McCabe. When I hear his performances of Clementi (or Haydn, Ravel, or any number of other composers), I feel as if I am compelled to truly listen to the piece in question, noting all its details. There are no distractions coming from the performer, nothing pulls focus from the music and makes me think "that was a daring choice", or "what is he doing there?". To be sure, McCabe is making many interpretive choices, but the logic is solid to the point that those choices seem unassailable. Rather than seeming random or whimsical, they are simply part of the fabric of the piece. This is the mark of a great musician.' - Richard Masters, Music-Web International

'Wonderful to see John McCabe finally being recognised as a pianist. Recorded on a Bosendorfer in 1981, the sound of these revelatory Scarlatti and Clementi sonatas is astonishingly present...McCabe sees Clementi's music as powerful and multi-faceted...an indispensable release.' - Colin Clarke, International Piano

'These days reissues may not get the attention they deserve. That would be a mistake in the case of these scintillating performances now so fortunately rescued.' - Peter Dickinson, Musical Opinion

'There are times when life does not appear ideal, but then there is a release that takes you to the happier land of music...The whole set is a stunner and well worth having. McCabe with his fingers sings, we mentally and musically dance along and we are all the better for it. Strongly recommended for the repertoire and performance. Bravo!' - Grego Edwards, Gapplegate Classical Modern Music

Scarlatti and Clementi Sonatas is issued by Divine Art on DDA 21231.